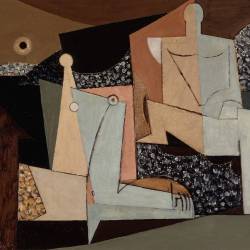 https://en.muzeo.com/sites/default/files/styles/image_basse_def/public/oeuvres/paintings/modern/figures_on_a_beach138331.jpg?itok=Q5CnSZy8
Reproduction d'art
Figures on a Beach
(Louis Marcoussis)
From 34.42 €From £29.26From 28.68 € HTFrom Excl. VAT £24.38
Peintre

Louis Marcoussis (1878-1941) was a Polish artist. After studies in Warsaw and Krakow he moved to Paris and studied under Jules Lefebvre. His first exhibition was at the 1905 Salon d’Automne and from here he fell in with some of his renowned contemporaries, such as Apollinaire, Braques , Degas and Picasso.

His early work was influenced by the Impressionists, however in 1911 he joined the cubist movement which would define his œuvre.