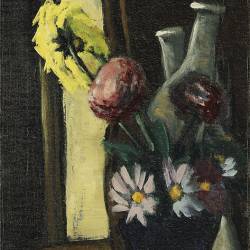 Max Beckmann was born on February 12, 1884 in Leipzig, Germany. He began his studies at the Weimar School of Fine Arts at the age of 16, where he received a classical education before moving to Berlin. He was interested in modern paintings by great masters such as Munch, Van Gogh and Cézanne. During the First World War, Max Beckmann was mobilized on the Belgian front as nurse. In the 1920s, his style evolved and became more critical. He was then a central figure of the New Objectivity. It was during the Weimar Republic that the artist met the most success: first professor at the Fine Arts of Frankfurt from 1925, he receives, in 1927, the gold medal for the honorary prize of the Empire for German Art. From 1933, with the arrival of the Nazis in power, Beckmann was removed as a teacher and was described as a «degenerate painter». He was forced to flee to Amsterdam. At the end of the war, Beckmann moved to the United States where he taught in Brooklyn and Washington. He died on December 27, 1950 in New York.

Max Beckmann was an expressionist painter and draughtsman of 20th century German origin. His famous works are «Adam and Eve», «Coastal Landscape with Balloon» and «Great scene of Agony».

Christ and the Woman Taken in...
Max Beckmann

In the Car
Max Beckmann

See all
artworks from
Max BeckmannDiscover