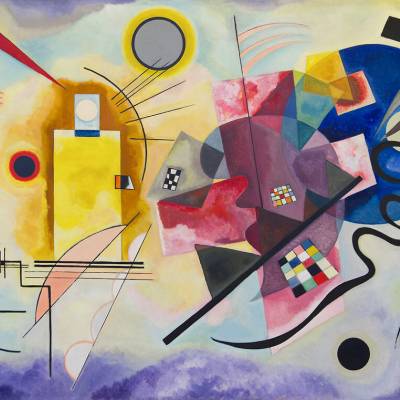 Abstract painting was born in the 1910s by freeing itself from figuration and visible reality.

It was in 1913 that Kandinsky developed pictorial abstraction by creating the very first painting of abstract painting. He moves away from figuration with his first abstract paintings without any reference to landscapes. At the same time, in Paris, Robert Delaunay created canvases only made of circles of concentric color (orphism) and Kazimir Malevitch, in Moscow, assembled simple geometric shapes and defended the supremacy of pure form (supremacism). Between the 1920s and the 1950s, hundreds of artists converted to abstract art and painting. After the second world war, the school of Paris (Hartung) and a new generation of American artists (Rothko, Pollock ...) created important works and abstract paintings. In the early 1960s, artists were more seduced by pop art, which was inspired by popular culture (comics, cinema, advertising, etc.). Abstract art has also been dulled by many followers who have produced decorative works, without ambition.

Abstract expressionism flowered in the 1940s and 1950s in New York. It covered a variety of painting styles, but all its practitioners conveyed a strong emotional content, emphasized the sensuousness of paint, and generally worked on large canvases. The term abstract expressionism was first used in connection with modern American painters in 1946 by Robert Coates, art critic of The New Yorker but it had also been applied to the work of Wassily Kandinsky in the 1920s. Abstract expressionism was a response to postwar American society. In a conservative, and increasingly homogenized culture, artists felt a need to cmmunicate thier innermost feelings and experiences. In doing so, they created the first American art ovement to achieve wourldwide influence.

Birds in the gardenPaul Klee

In addition to abstract art :